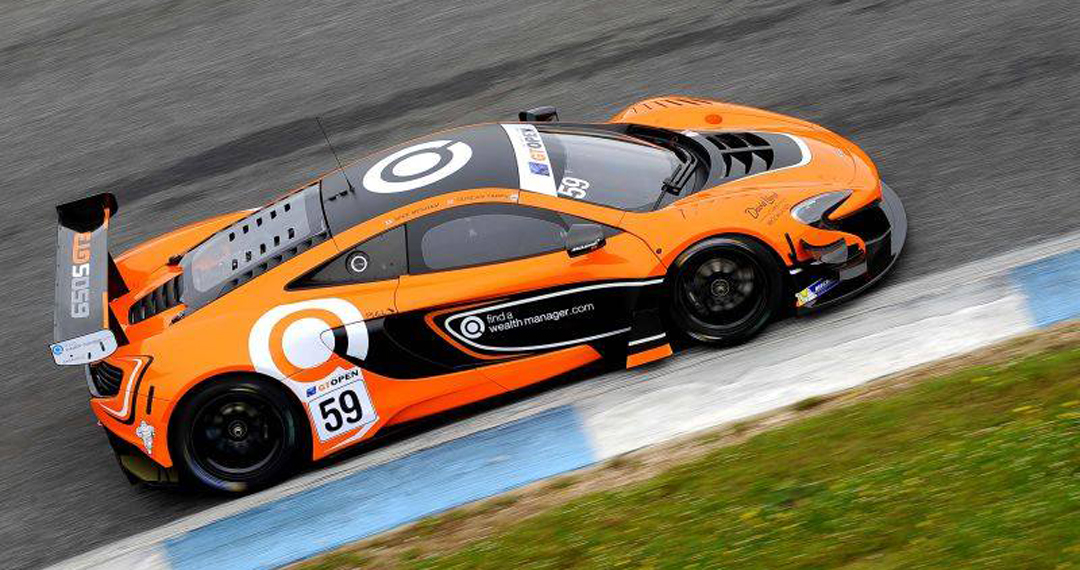 This weekend witnessed an exciting start to the International GT open series 2016 in Estoril, Portugal with the findaWEALTHMANAGER sponsored McLaren winning on day two.

“We couldn’t have wished for a better start on our debut” commented winning driver Michael Benham. “We are so elated and it’s even difficult to realise that we won in our very first appearance in the series, in front of such a high-level competition!”

Along side team mate Tappy the duo had an eventful first day of racing on Saturday. Trouble in the pits meant they came in sixth place. The second day of racing they were looking like taking a comfortable third when last-minute drama unfolded. In the penultimate lap the leading McLaren 650S of Alexander West collided with Fabio Crestani’s Lambo with both of them leaving the track. The McLaren 650S with Tappy at the wheel had a clear run to take finish line ahead of the Drivex Audi R8 LMS ultra of César Campaniço-Andrés Saravia, while the Orange1 Team Lazarus Lambo of Crestani-Biagi managed to salvage third place.

Duncan Tappy: “It was a great job from everybody in the team. Last laps were hectic, I was behind the two leaders and one could figure that something would happen, as it did!”.

Benham and Tappy are racing for a newly-created McLaren team based in Leicestershire called Garage 59.   All drivers in the team are new entrants to the series. The team manager Tim Mullen has a wealth of track experience from the pros, the team are confident of a solid result in their campaign and this win confirms their potential.

The co-founder of findaWEALTHMANAGER.com, said: “We’re delighted for the team! It’s such a great achievement on their maiden outing. The race was so exciting with some great overtaking and the McLaren 650S looks simply stunning. Who needs Formula 1 when you have a series like this that’s exciting and features cars that we can relate to. The season is set to be a thriller and we are proud to be their major sponsor.

He continued “Motor racing appeals to exactly the kind of affluent individual that uses our website. They may be cash-rich, but they are also likely be time-poor, and therefore need a fast yet really robust way to meet their best-matched wealth managers so that they can get back to building – and enjoying – their financial success.

The fact that many of our users are very interested in investing in sports and classic cars will also give us lots to talk about with the high net worth individuals coming to the site, and we hope to get lots more people thinking about how to make their wealth work harder through this sponsorship.

“Since launching in 2012 we’ve helped thousands of wealthy individuals find the right money manager for their needs. This sponsorship will help our message reach thousands more and we’ll be following our team around Europe cheering them on every step of the way!”

The next International GT Open Series race will be at the beautiful race track at Spa (Belgium) on 21st and 22nd May. Follow us on social media to see updates on the teams progress.

Register for a 30-min online session on the many risks and issues to consider when going through a divorce.

Rapid changes in the investment and fiscal landscape are prompting the affluent to get proactive across their wealth management plans before things really heat up.