You are here: Home › Expert Corner › Industry View › Investors, don’t get caught out by complacency

Investors, don’t get caught out by complacency

Investors, don’t get caught out by complacency

Stock markets at an all-time high, and so is complacency, despite the fact that risks abound for the unwary. Here, Phil Morris, Investment Director at Ruffer, explains the dangers investors need to be on guard for – and some defensive measures they might deploy.

Pretty well every asset class has performed well for the past 30 years. From equities, bonds, property and infrastructure to fine wines, art, and rare cars – all have enjoyed an exceptional run, despite some major blips along the way.

It is very hard for investors to go against the comfort of running with the herd, as our brains are hardwired this way. Most informed investors are aware of the risks of rising interest rates and bond yields, and can see the current high levels of political uncertainty. They can also see that cash and the safest of bonds are giving them no return – indeed returns are negative when adjusted for inflation. So, it may seem that the path of least resistance is equities, particularly as economic growth is picking up.

At Ruffer, we believe this approach carries significant risks. To understand why, consider the recent history.

Since the 1980s, we have been in an era where major central banks have used inflation targeting as their policy goal. However, there have also been major disinflationary factors at work, including the collapse of communism, offshoring, a major increase in the globalised workforce, the rise of the internet and rapid technological change.

The “cult of the central banker” has resulted in falling yields, debt levels increasing to unsustainable levels, and the mispricing of risk.

As a result, for many years central bank policy has been structurally too loose. Any hint of a disinflationary shock was met with further stimulus. The “cult of the central banker” has resulted in falling yields, debt levels increasing to unsustainable levels, and the mispricing of risk. As such, the stresses and skews in markets have been building over a generation; the dot com and Lehman crises collapses were not effective in clearing them.

Since 2008, monetary policy has moved into a more experimental phase. Interest rates have been taken to the floor, with additional stimulus provided by increasing the quantity of money. This has driven a hunt for yield by investors. Volatility has morphed from being merely a measure to becoming an input into the investment process.

Where are we now?

With the current economic indicators looking pretty rosy, central bankers are now starting to reverse their liquidity stimulus. The long tide is starting to turn.

A significant part of the investment world is now using strategies that are designed to make money as volatility falls, increasing their exposure to risky assets as the fall continues.

In the US, this is underway and the Europeans are starting to reduce the level of stimulus as a precursor to a reversal. After 30 years of easing, tightening monetary policy carries risks. The more evident risks relate to the impact on bond yields and the pricing of all investment assets, as well as the increasing default risk as debt servicing gets more expensive.

The less obvious risk relates to investment behaviours. A significant part of the investment world is now using strategies that are designed to make money as volatility falls, increasing their exposure to risky assets as the fall continues. This is a self-feeding mechanism that is inherently unstable. If events cause a reversal, the result could be a sharp sell-off in asset markets. As such, it seems that the seeds of the next financial crisis are in the investment management industry, not the banking system. Unlike in 2000 or 2008, there are no simple assets in which to hide in and wait.

What can be done?

For many clients, moving to cash may seem appealing. Unfortunately, this requires both timing the move into cash and timing the move back into markets later on. These timing decisions are the hardest ones of all. They require selling assets that you like and that have done you well, and later on buying assets that you feel very uncomfortable about. Most people will struggle with this and time it wrong – often disastrously so, buying at the top and selling at the bottom. In addition, inflation means that cash is giving a negative real return and this is likely to get worse in the future.

At the moment, we are maintaining some equity exposure for the continuation of the good times and some protection for when the wave breaks.

An alternative is to use an investment manager such as Ruffer, who are not trying to maximise the return, but rather to preserve and grow capital and avoid large losses. We believe that wealth preservation and a slow accretion of value will ultimately produce better returns than riding the waves of the markets, particularly if the waves are getting to the point of breaking.

At the moment, we are maintaining some equity exposure for the continuation of the good times and some protection for when the wave breaks. We also have some exposure that will benefit if inflation rises faster than bond yields – which we believe is the most likely way global economies deal with excessive debt. Our approach doesn’t suit everybody as we tend not to get too involved in the exuberance that can get investors so excited. However, we would be very happy to talk to those whose frame of mind is to preserve wealth for the long term. 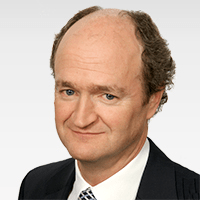