Ben Kumar, Investment Manager at 7IM talks about how the General Election Causes Investment Uncertainty and what you can do about it.

The media circus meets the political one, with markets caught in the middle.

The UK has had a long history of attention-grabbing and impressive journalism – both our tabloid and broadsheet newspapers have an investigative track record that puts Sherlock Holmes to shame.

Similarly, over the centuries, the UK has been fortunate enough to have had some of history’s greatest (and most controversial) figures sitting in Parliament. From Oliver Cromwell, through Gladstone and Disraeli, past Churchill and all the way to Tony Blair, the elected leaders of this country rarely face the accusation of being political lightweights.

Yet every few years (actually, every five years now, by law) the media, the politicians and almost everyone else seems to forget this. The General Election seems to have an effect much like transfer deadline day in football, or the red carpet before a film premiere, where people lose track of the real point of the event (namely running the country, scoring goals for a team throughout a season, and putting on an engaging and diverting acting performance) – and focus with almost unhealthy scrutiny on the precursor. The outcome, be it PM, star striker or Oscar winner, is forgotten in a frenzy of what was said, worn, known and done.

And so, over the next couple of months, until the 7 of May, the UK election is going to loom larger and larger. Global financial markets tend to react in the very short term, to things like poor earnings reports, surprise rate cuts and earthquakes, or in the much longer term to things such as economic growth and technological change. Elections are often ignored until the very last second – as they are considered either easy to predict, or so difficult as not to be worth the effort.

Given the uncertainty prompted by the decline of the Labour and Conservative parties, the rise of UKIP, SNP and the Greens, and of course the near collapse of the Liberal Democrats, investors are likely to pay slightly more attention than they did to the Scottish Referendum. Indeed the unexpected closeness of that event should prompt markets to look more closely in the coming months.

Before digging into the manifestos in later weeks, there are a number of things that we believe UK investors need to consider. Whatever the eventual composition of the government, the UK will have to confront divisive issues – whether it is a referendum on EU membership, or another breakaway attempt by the Scots. One thing markets love are quick wins and neither of these issues are likely to be easily or quickly resolved.

How will investors react to an unsettled couple of years in the UK? Well, political “upheaval” in the UK is fairly humdrum compared with most of the rest of the world (very few riots, protests, minimal loss of productivity), and it may be that Europe and the Emerging Markets are still scarier places. In addition, the FTSE 100 has companies in it whose fundamental businesses are mainly based outside the UK, which in theory should help immunise them from any election-related wobbles. Having said that, investors outside of the UK often don’t realise this fact, and if spooked tend to sell the FTSE 100 en masse. In addition, sterling may be vulnerable as investors seek safety elsewhere. 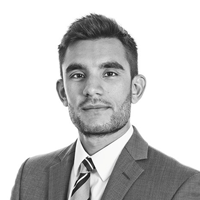